How To Handle 9 Year Old Tantum 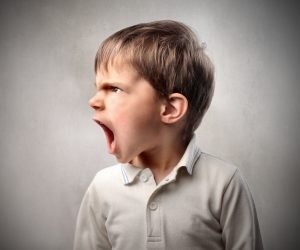 My 9 year old is going nuts! He’s rummaging around for food as though he hasn’t eaten in 24 hours! He can’t find the type of food that he WANTS. I can see him building up to a furious tantrum!

The last couple of blogs have been about toddler tantrums and while I am on a roll, I wanted to show you that The Listening Touch works for all ages.

Today’s story is from Chaya and how she deals with her 9 year old son’s food tantrums.

For instance he knows that he can have sweets after his meal but this means he has to have a whole meal, not just a bite or two.  If he doesn’t want a big meal we offer him fruit instead. That’s when he throws a tantrum, which takes the form of hitting, throwing whatever is at hand and saying hurtful things.

What I have trained myself to do is to think before I react to the tantrum which is no easy feat! The first thing I do, as a mom, is to tell myself that his anger has nothing to do with me. Maybe what I did or said caused the anger, but the anger is not about me. This changes my perspective in how to deal with the tantrum. I am calm and thinking clearly when I speak to my son.

Sometimes he blames me for the situation that I’ve put him in, but at the same time he will come closer to me, stand next to me and let out his anger. I have a bigger chance of empathizing with him when I place my hand on his shoulder or give him a hug.

If he approaches me by pushing his shoulder into me, or  shoving me, then I understand that he needs a hug. At other times, he approaches me playfully, and touching each other becomes a game, giving half hugs which then become full blown hugs! 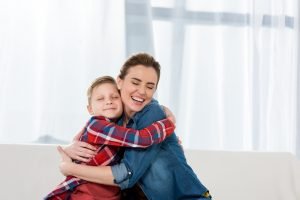 At other times there are no hugs because distance is needed for at that moment. I say to him: “I know you’re angry at the moment, but I’m here if you need me. When you’re relaxed we can work this out so everyone will be happy.”

Most of the time he calls me back, he wants my support and affection. He recognizes that I haven’t been pushed away by his behavior, but am available for him.

I realized that the moment I did not take the tantrum personally, that I was not responsible for his emotional reaction, all the potential guilt and blame that I put on myself, did not exist. My defenses were lowered, and I was open to giving touch and receiving it”.

To learn more, watch my video How To Handle 9 Year Old Tantrum.

PrevPreviousChocolate Tantrum! How To Calm Your Toddler
NextHow To Get Your Overtired Toddler To SleepNext